I was really impressed when I read that Eliza Quitman had a prenup before she married John Quitman.  This was quite the gutsy move back in those days, in my humble opinion.  Below is an excerpt regarding that prenup as well as other info on the Natchez Nabobs and such from the book "Antebellum Natchez" by D. Clayton James.  We carry the book in our Gift Shop and if you'd like to order a copy - or better yet drop by and visit or stay with us and take advantage of our Summer Special!  Rates are discounted 15%-30% thru August 31, 2015.  You can BOOK DIRECTly on our website using the code SS15MW or call 601.442.5852 to make your reservation or order a copy of the book. 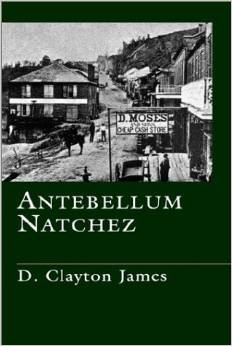 "John A. Quitman sensed something of the increasing aloofness of the aristocracy when he proposed to the daughter of Henry Turner, a well-to-do merchant and brother of Edward Turner.  Quitman had to sign a lengthy contract prior to the marriage in 1826, assuring the family of his bride-to-be that her “said lands . . . shall go to the Heirs and personal representatives of the said Eliza Turner, and not to the Heirs or personal representatives of the said John A. Quitman.”  When Quitman acquired spacious “Monmouth” as a home, purchased four plantations and 40,000 acres on speculation, and achieved distinction in legal and political circles, the local nabobs gradually accepted him into their select society.

Not only was it difficult to marry into the aristocracy, but for one unfortunate plebeian an attempt to gain the acquaintance of a genteel young lady almost resulted in a duel with her father.

Rather showy exhibitions of personal wealth were obvious at almost every turn in Natchez and the vicinity.  The nabobs’ effective imitations of the English landed gentry impressed Canadian visitor William Kingsford, who found boxed gardens “cut into quaint figures as was the fashion of the last century” in England.  By 1860 there were at least forty large, expensive homes in and near the town which could be considered in the mansion class.  Britisher Sir Charles Lyell, who was accustomed to visiting in the mansion of the English gentry, described the Natchez aristocrats’ dwellings as “elegant” and “charming.”