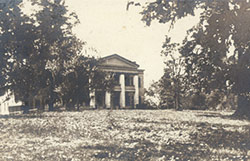 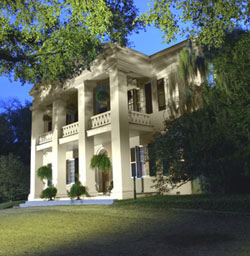 1824 - John A. Quitman purchases Monmouth as home for his wife Eliza Turner and newborn daughter, Louisa.

1833 - Cholera claims Quitman’s infant sons, John and Edward. An enslaved woman at Monmouth named Aunt Dicey is put into service as a nursemaid to Eliza and John Quitman’s children.

1842 - John and Eliza’s family grows to seven children. Aunt Dicey is “banished” to Springfield Plantation by Eliza for “misbehaving.”

1846 - John Quitman serves as a victorious general in the war with Mexico he is assisted by “faithful” Harry Nichols. Quitman procures a daguerreotype of Harry.

1856 - Aunt Dicey is allowed back at Monmouth. Viola Vessels, a Monmouth house slave, is bridesmaid at the wedding of enslaved couple at neighboring Melrose, a suburban estate owned by Quitman’s law partner, John McMurran. Viola is married the following year to Marcellus Brannick, a house slave at Melrose.

1861 - The state of Mississippi secedes from the Union. The Quitman daughters see their husbands off to war. Monmouth slaves are asking, “how’s master”?

1865 - The only staff left at Monmouth is “Fred and his family along with Harry and his wife”. Surviving Quitman daughters sell off Monmouth’s household possessions to former Monmouth enslaved to supplement their income.

1875 - A Lease/Lien agreement is signed with John Williams, giving the Quitman daughters a lien on any cotton grown on Monmouth premises for the payment of rent.

1902 - Belle Vessles, a former house slave to Governor Quitman at the “White House of Mississippi”, lives at the edge of Monmouth where she and her husband rent Monmouth land for crops. One year later Quitman’s daughter, Annie Rosalie Quitman Duncan, sells a half acre of Monmouth to Viola Brannick (a widow) for the sum of $200.

1924 - Monmouth passes from the hands of Quitman descendants when it is sold to Annie Gwen. Corrine Scott sells her portion of Monmouth to Mamie Davis for $500.

1978-2012- Ronald and Lani Riches purchase and begin restoration of Monmouth after decades of neglect.  After 3 years of restoring the main house and original kitchen, work begins on the 26 acres.  With archeological digs indicating where original buildings once stood, new buildings for the hotel use are placed on these footprints.

2012-present - Nancy and Warren Reuther are the current owners of Monmouth Historic Inn & Gardens.  With extensive experience in the Hotel and Tourism industry, they continue to make sure every modern comfort has been provided in the 30 elegantly appointed spacious rooms and suites, yet carefully integrated as not to spoil the historic architectural virtue.